I was off for two weeks, so I decided to take the chance to complete the new server build. I headed over to Newegg, ordered an anti-static wrist strap -- something I neglected on my first build -- and assembled the part list for a server that could handle low-latency performance testing. I decided to target Kaby Lake-X, a big step up from the Sandy Bridge Xeon architecture used in the Z800, though not the top-of-the-line Skylake X; there are reports of cooling problems with the 10-core i9 X Series.

The heart of it is this 4-core i7 chip on an ASUS motherboard with 32 GB of DDR4 memory:

One of the things I like about the motherboard is the PCIe slots accommodate wider expansion cards, which means you can install heavyweight GPU cards. But that requires plenty of power and cooling, so the case and 1000W power supply is from Cooler Master, with quad fans and capacity to add two more if needed:

A pair of OCZ 256 GB NVMe drives replace the single Samsung EVO 850 that failed to work in the Z800. My hope is that with the dual M.2 slots on this motherboard I can configure the pair with striped SATA RAID and get maximum performance out of the boot drive and swap partition.

And one concession to over-the-top overclocked system design, the Cooler Master V8 CPU cooler, because, come on, who can say no to a CPU cooler that looks like a Hemi ripped from the hood of a circa-1970 Dodge Charger?

Not included, but necessary: a set of trifocals. I last built a PC at home 14 years ago, and it's clear my middle-aged eyes are no longer suitable for close-up detail with my current glasses.

The Cooler Master HAF 912 case is one of their mid-tower ATX offerings: 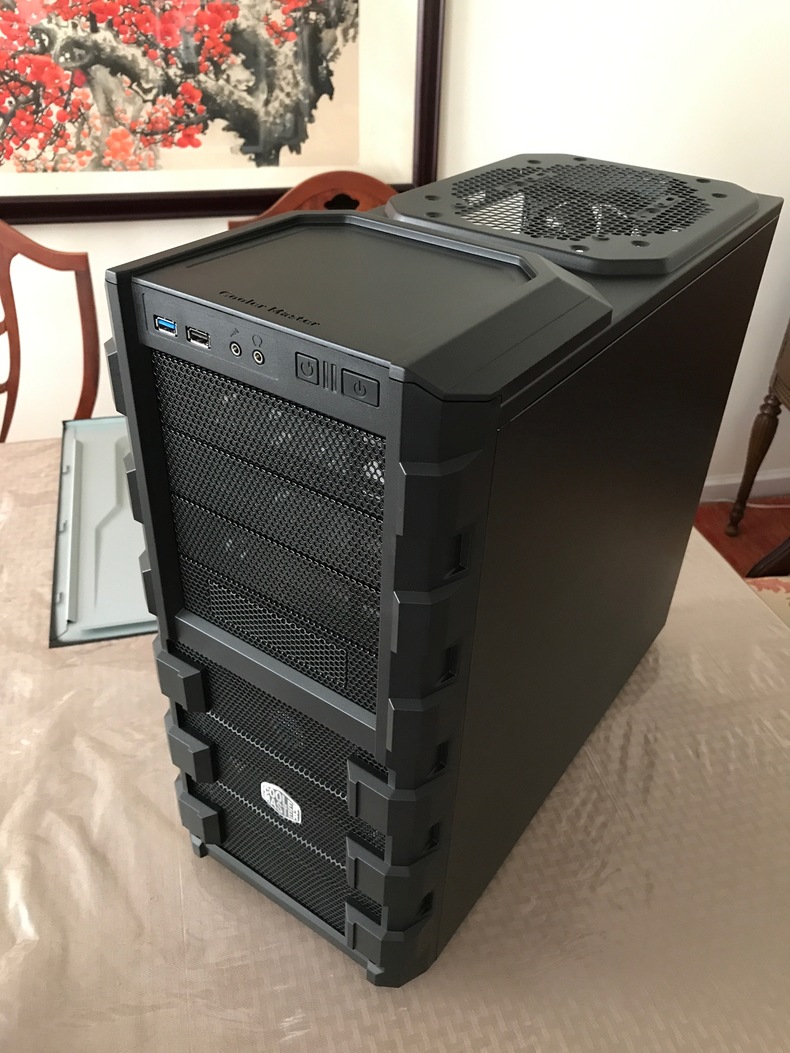 It has a lot of capacity to add fans, so I put them into the top (two), side (one) and front panel (one in addition to the built-in one), giving the case six fans in total: 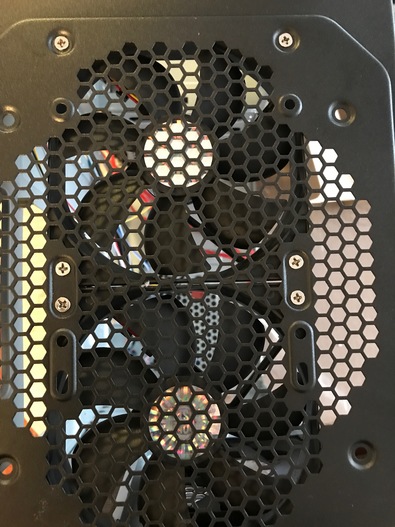 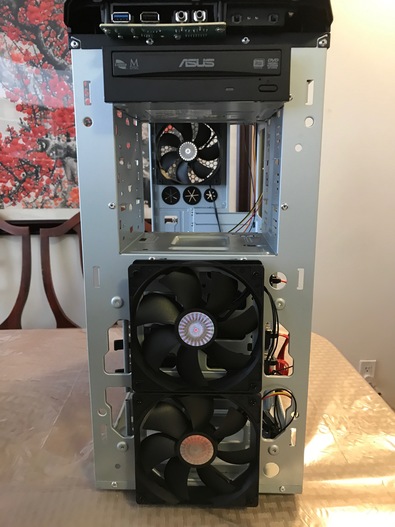 What I did not realize is that the fan plugs were 3-pin, and the motherboard took 4-pin. You can in theory use them anyway -- relinquishing fan control by using just the right-most three pins -- but these particular fans did not fit on the Asus motherboard. An inexpensive cable fixed it:

The motherboard and CPU cooler 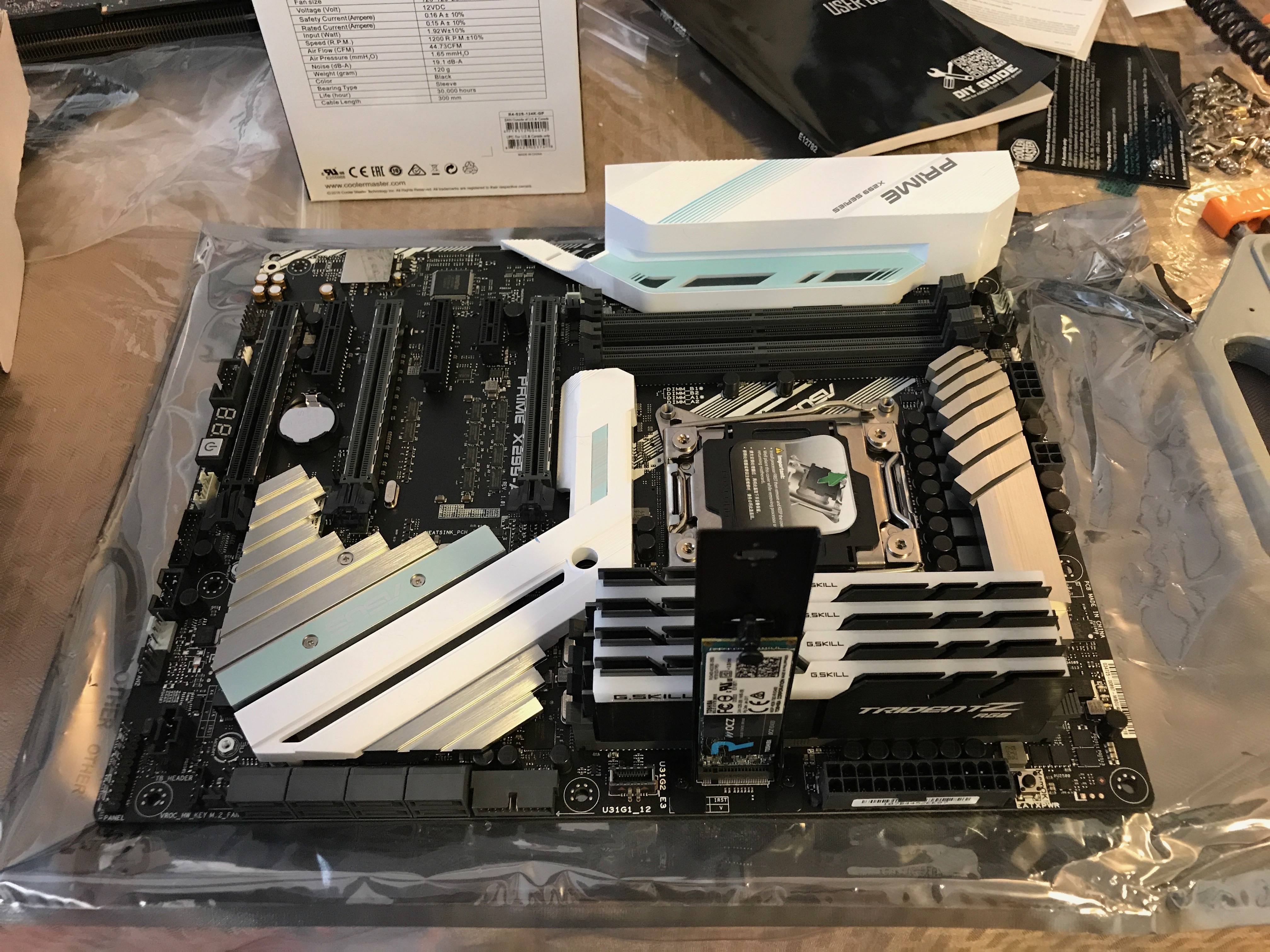 The V8 GTS is a beast, and tricky to install -- not obvious from the instructions how to attach the brackets, and there wasn't a lot of space left. I ended up having to take it off and re-mount it to complete the motherboard installation: 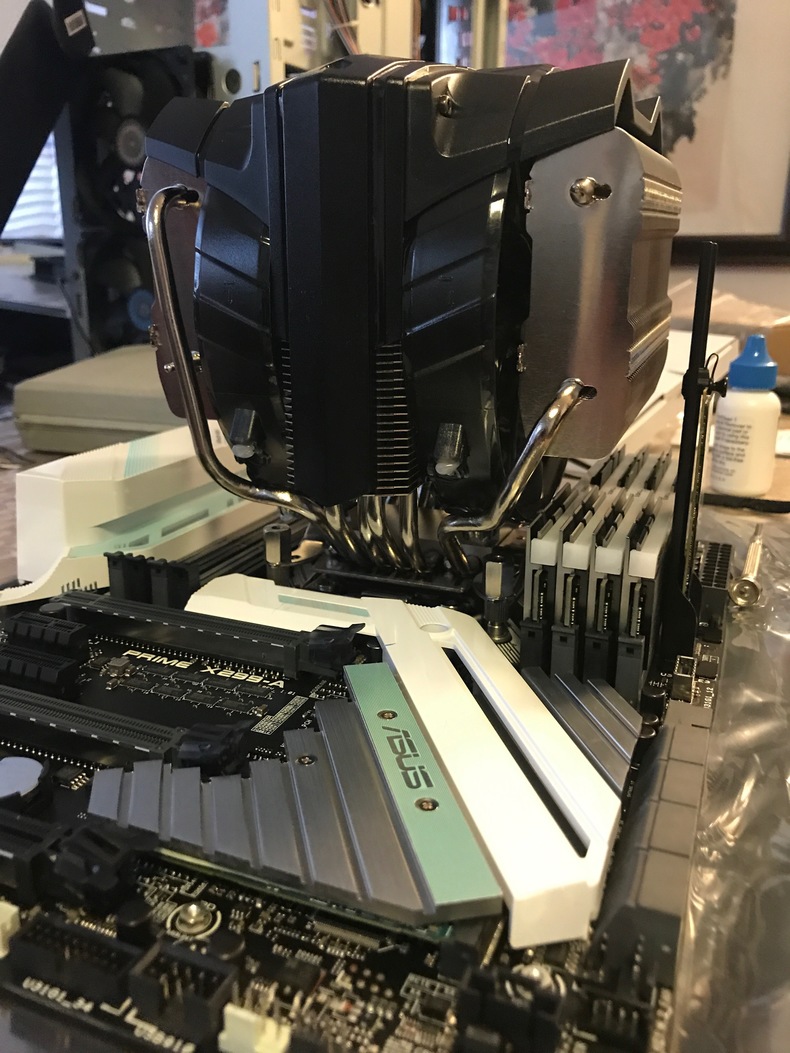 Underneath that hulking CPU cooler is the i7, with the 4 G-Skillz memory chips to the right. Less easy to see are the two M.2-mounted NVMe drives, the Toshiba OCZ's. There's one vertical to the right of the memory bank and CPU cooler, and underneath the metal triangle up front, which acts as a heat sink for the NVMe as it sits underneath the hot NVidia GPU card.

I moved the Z800's MegaSAS RAID controller, SSD and triple 3TB Barracuda drives into the drive cage, which was very slick: the case came with the rails to clip onto the drive, and you just slid them in, giving the new machine an absolutely obnoxious six drives in total -- two NVMe, one SSD and three spinning disks, which will be great for I/O performance testing: 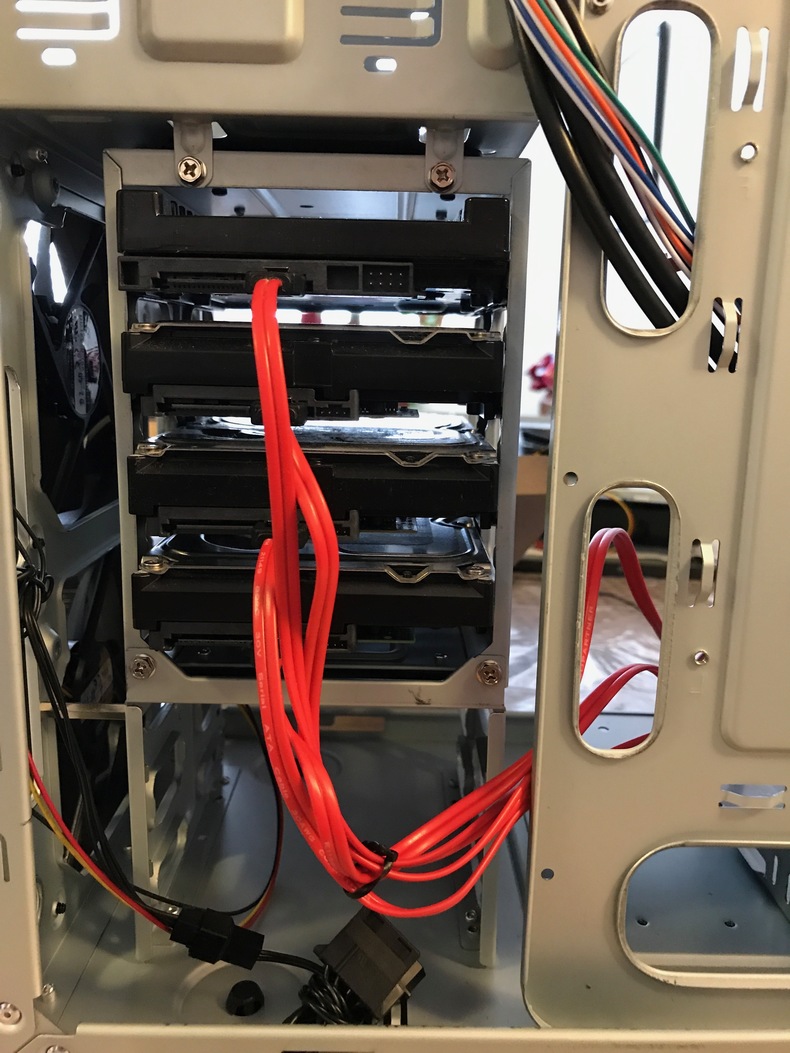 This made me very nervous, as it had been years since I last built a PC and the first one did not go so well: it failed to start up entirely, and I had to go to the local computer repair store with my tail between my legs to get them to check what I had done wrong. So I was hoping this time it went better.

It powered up first time, with just two problems: no SATA drives detected, and DVD drive non-functional. I shut down, and confirmed the power connector for the DVD drive was out and the SATA drive cable was not plugged into the MegaSAS RAID controller. With that fixed it all came up beautifully: 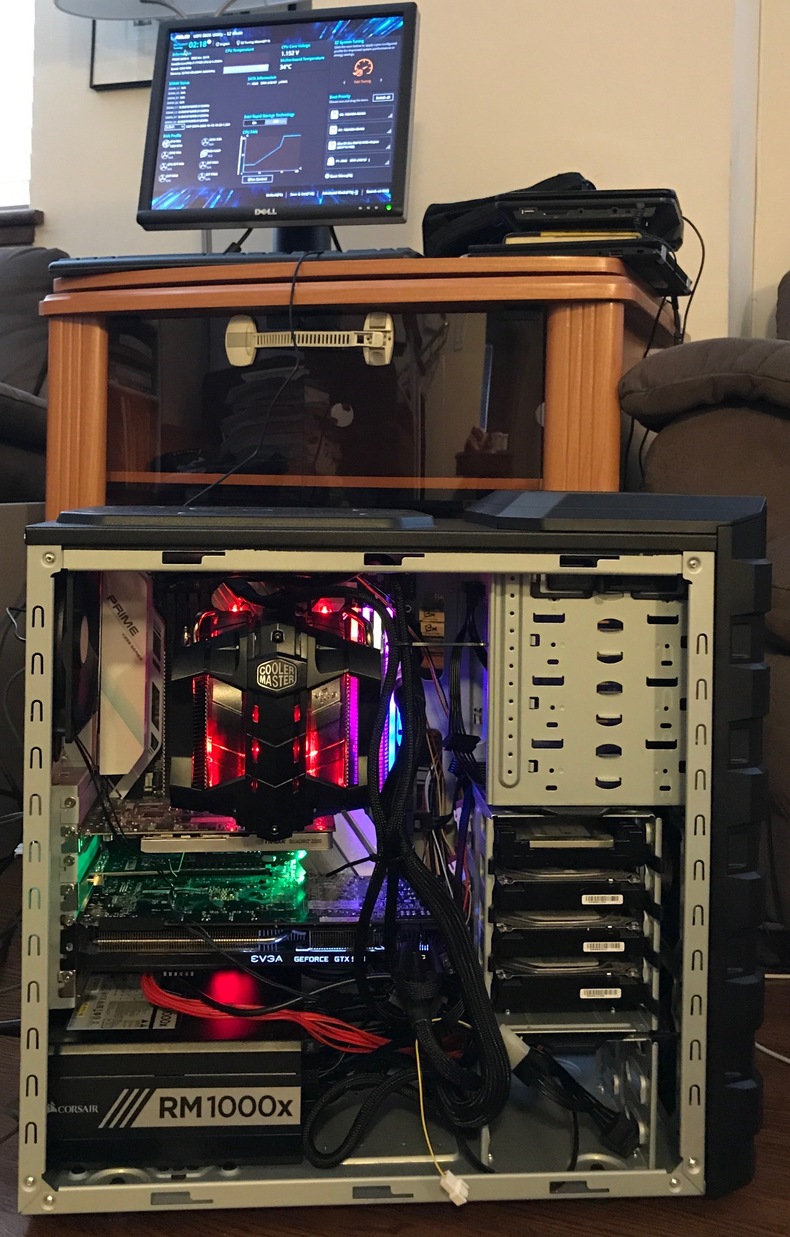 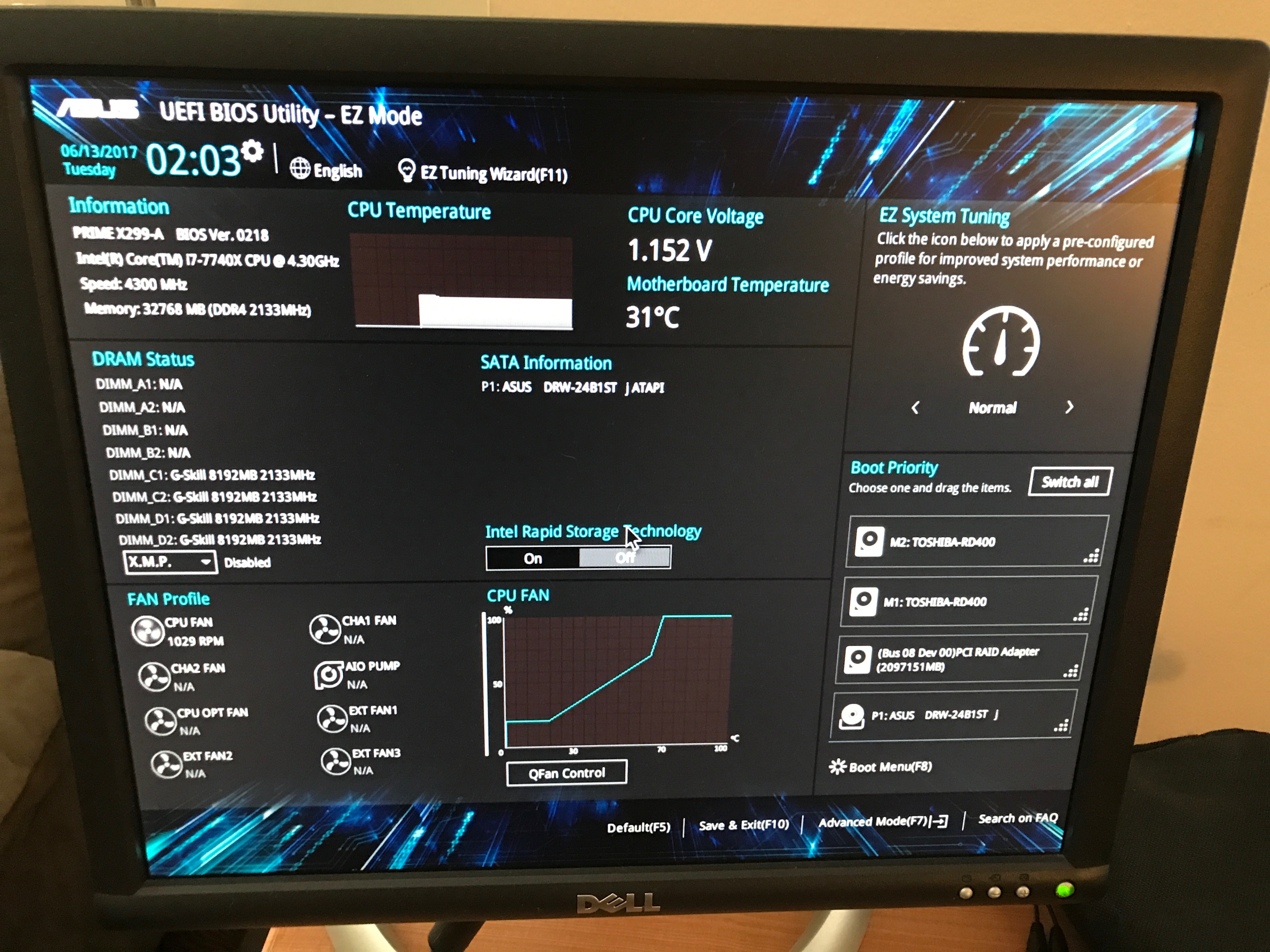 Close-up on the cooler, memory sticks and NVidia cards: 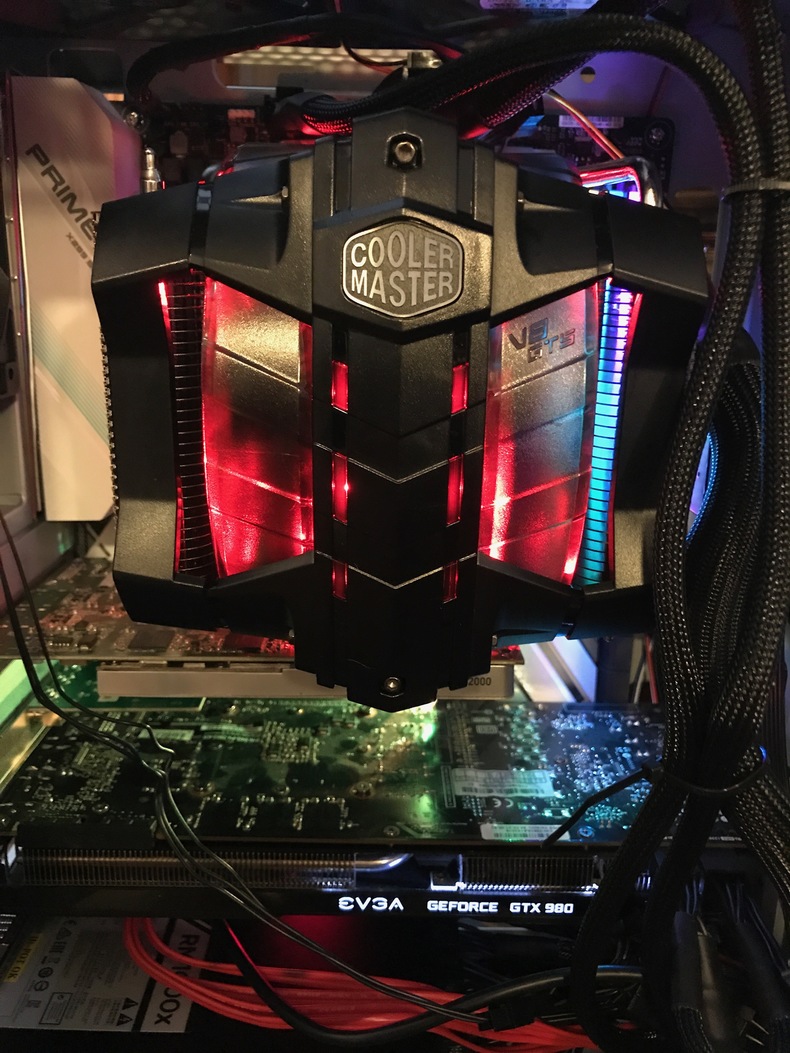