Turtles All the Way Down

Bitcoin after the ETF

On Friday, March 10th at 4pm the SEC announced their ruling on COIN, the Winklevoss twins' proposed ETF listing on BATS. The price whipsawed, spiking to $1360 on GDAX around noon on speculation that the SEC would take no action (approving the ETF by default) and dropping to $956.85 right after the decision. 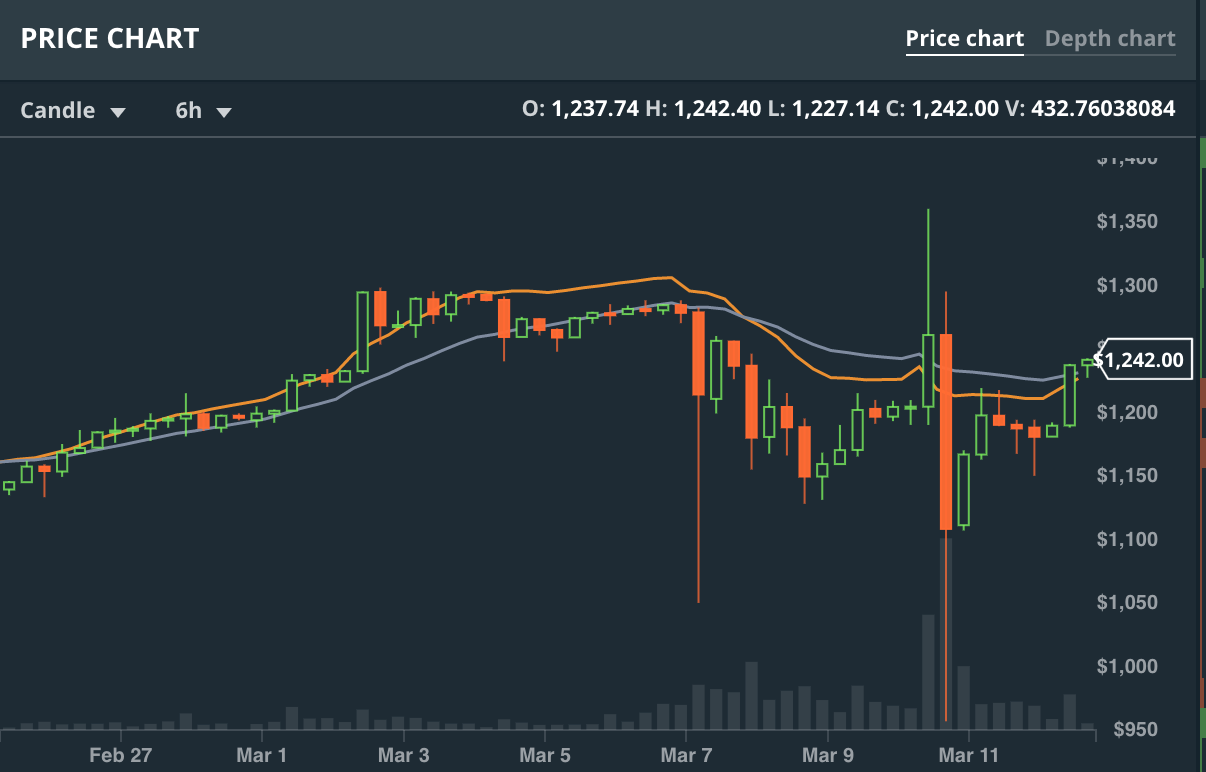 The price recovered and is currently trading around $1240.

There are several things going on concurrent with the decision. The PBOC seems to be trying to balance AML concerns and controlling fund outflows with a desire to not disrupt the country's position in an emerging technology: China has a leading role in the market, and the commentary at the National People's Congress by Zhou Xuedong suggests they are concerned about driving Bitcoin underground, off-exchange. There seems to be a preference to engage with the current exchanges and push them to tighten up their KYC/AML policies.

A large Jersey-based hedge fund, GABI, unwound its long position prior to the ETF decision after issues in February, declaring they believed it had at most 25% chance of approval. Given their size and Bitcoin's illiquidity this put downward pressure on the price and probably encouraged other market participants to enter long positions ahead of the decision; at the time prediction markets were calling it as a 50-50 chance, which probably reflected excessive optimism about the SEC's decision.

To understand why you need to go back to September 17, 2015. On this day the CFTC ordered Coinflip to cease operations as a Bitcoin derivatives market. In their ruling they stated the following: "[i]n the Order, the CFTC for the first time finds that Bitcoin and other virtual currencies are properly defined as commodities." This can be put alongside the SEC's ruling: "[t]he Commission believes that, in order to meet this standard, an exchange that lists and trades shares of commodity-trust exchange-traded products ('ETPs') must, in addition to other applicable requirements, satisfy two requirements that are dispositive in this matter. First, the exchange must have surveillance-sharing agreements with significant markets for trading the underlying commodity or derivatives on that commodity. And second, those markets must be regulated."(my emphasis)

The SEC's conclusion was clearly that this condition has not been met, and what such regulation would look like: "Although the CFTC can bring enforcement actions against manipulative conduct in spot markets for a commodity, spot markets are not required to register with the CFTC, unless they offer leveraged, margined, or financed trading to retail customers. In all other cases, including the Gemini Exchange, the CFTC does not set standards for, approve the rules of, examine, or otherwise regulate bitcoin spot markets .... The key requirement the Commission is applying here, however, is not that a futures or derivatives market is required for every ETP, but that—when the spot market is unregulated—there must be significant, regulated derivatives markets related to the underlying asset with which the Exchange can enter into a surveillance-sharing agreement." So the necessary condition for an ETP is a CFTC-regulated Bitcoin derivatives exchange or a spot market with leverage features that is regulated by the CFTC. BATS tried to claim in their application that CFTC oversight was enough, but the SEC rejected this argument. They also pointed out that the one approved SEF for Bitcoin (TeraExchange) was sanctioned by CFTC for wash trades in 2014.

This is at bottom a jurisdictional issue. One U.S. regulator ruled previously that it has jurisdiction over cryptocurrency trading and that Bitcoin should be considered a commodity, consistent with the 2014 IRS ruling that cryptocurrencies are not currencies but property subject to capital gains tax. The SEC held that to approve an ETP based on Bitcoin, the ETP must be linked to a regulated market. There are at present no CFTC-regulated commodities exchanges listing Bitcoin spot, futures or options, and my assumption is that will close the door on any ETF approvals so long as the SEC believes that it cannot meet its requirements under the Exchange Act for products linked to unregulated markets. In this instance, the SEC cannot act before the CFTC.

So what's next? GABI, having unwound its large positions, will have to get back into the market, which should provide some upward pressure on the price. The National People's Congress will end on 15 March 2017, and China's leading exchanges have announced their intention to postpone withdrawals and adopt industry standards -- so there should not be any significant news out of China. And my presumption is that market participants will continue to assess an unrealistic probability of approval for SolidX at end of March. This should be a prescription for yet more volatility: a push upward in March followed by another shock around the end of the month.