Solaris ZFS and the 2 TB Limit

Starting over with the new server

The two hard drive caddies arrived, and I installed the dual Seagate Barracuda 3 TB drives. Unfortunately the system BIOS did not recognize more than 2 TB, nor did Solaris or Fedora 21 Server. 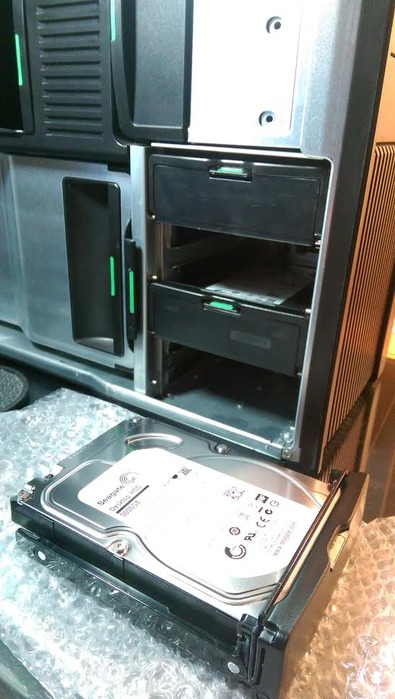 From Seagate Beyond 2TB site my understanding is on older BIOS the only way to make this work is with a special driver available under Windows 7, and even that handles it by segmenting the disk mounts. Fedora 21 did not manage it. From an HP support posting they indicated there was no way with the on-board controller to get more than 2TB -- you needed a separate RAID controller card.

I decided to bite the bullet and get a third drive, another drive caddy, a SATA fan-out cable and an LSI MegaRAID SATA/SAS 9260-4i 6Gb/s PCI-Express 2.0 controller card. This has the added benefit of supporting the full SATA III 6.0 GB/second bandwidth rather than 3.0 GB/second for the onboard SATA II.

When all the parts come in I'll replace the on-motherboard SAS/SATA connections with the RAID card, which should enable Solaris to see the full 3TB if the OTN Hardware Compatibility List entry also applies to the 4i; they list the 8i as supported. I know the HP Z800 supports it; I found a service manual that covers how to install and wire up the hard drive bay

I haven't yet decided to take the advice here and do a three-way mirror in ZFS or go with a RAIDZ configuration. Based on my measurements so far with ZFS compression the three-way mirror could hold more than 10 TB, or 15 TB with RAIDZ. More capacity would be good but my only backups are going to be the disks themselves. If something fails I'll have to hot-swap a new 3 TB in and rebuild the RAID array.